Sign In
Register
Due to inactivity, this wiki is a candidate for deletion.
If you believe this wiki should remain, please post a message at the community portal, or message the Wiki Manager directly.
Any objections should be made before 17 February, 2020.

From Circuits and Shields Wiki
Jump to: navigation, search

Ink is a playable champion in Circuits and Shields. Ink is a ranged fighter always looking to make a statement. If Twitter existed in the Avos world, she'd tweet about her success in the Arena. Using her natural connection to the world's energy, Ink skirmishes from afar, flinging all sorts of daggers and blades at her enemies.

Inside Ink lies a hunger -- not just a hunger to survive despite her circumstances, but a hunger to thrive and live in infamy. With the people of the world now focused on their own survival, they no longer found room in their hearts for a starving orphan. A Cinderella story was no longer special; Ink had known since childhood that she would need to walk a different path to satisfy her hunger in this mostly-dead world.

As children, Ink and her friends would use the town junkyard as a fantasy playground, imagining themselves as something greater. During one such adventure, Ink came across a set of rusty antique daggers and as she ran her fingers across them, Ink knew they had a hunger as well. A hunger to bite and hold. A hunger to command attention, just like her. The daggers provided an edge to her fanciful desires and gave her control in an unstable world. Ink would dedicate herself to these blades, learning their ins and outs until she could control them with ease, carving objects from her former junkyard playground into works of art. Soon, Ink’s talents began to garner attention in the slums as she performed small shows. Ink’s story of fame had begun, but the adoration of these humble crowds in grungy towns was fleeting and her hunger was far from satiated.

Ink’s notoriety grew; the street art and hat-passing of her youth became paid performances and product endorsements. Ink soon became the face of beauty on a dying earth, little girls around the world begging their parents for clothes and tattoos to match their idol’s. But as her fame and glory grew, so did her disappointment and her ever-present hunger, this still was not enough.

When the Broadcast came, Ink helped fund the building of the strange machine. The public saw this as an act of charity, but Ink had her own motives. She hoped that wherever this machine led, she might finally find the fulfillment she so desperately desired.

As Ink awoke in this strange new world, she reached into her pocket for the familiar cold handles of her daggers, but they were gone. Looking around, she noticed a funny blue haze that seemed to follow her. When she focused on this fog, knives began to dance around her, mimicking the strokes and carving patterns Ink had honed so well over the years. Ink and the others arrival had drawn a crowd and for Ink, a crowd meant a performance. The crowd applauded at the sight of her talents, Ink smiling all the while until she finally recalled her new daggers into her pocket with merely a thought. In this world, Ink and her daggers might finally satisfy their hunger.

ConduitPassive' Range
Walking over a Kinetic Blade causes Ink to pick up the Blade and gain a charge of “Conduit”. Conduit grants Ink an empowered basic attack in which she now throws 3 knives, with one hitting her selected target and the other two forking off into independent projectiles that deal 50% basic attack damage and apply on-hit effects.

W
Psychic BarrierLocation Target1000 Range
15 second cooldown 60 Mana cost
Ink tosses up 3 knives that fall onto a target location. The Knives then link up, creating an energy wall that slows and damages any enemy that walks through. The link that is hit is broken once it hits an enemy, dealing damage and slowing the enemy. These knives also link with any nearby Kinetic Blades currently on the ground to form an even larger wall. The knives from the Psychic barrier cast are not able to be picked up for Conduit.
SLOW: 60% of movement speed

E
Phase ShiftLocation Target600 Range
15 second cooldown 60 Mana cost
Ink phases and teleports to one of her nearby Kinetic Blades that she has previously placed. Ink also picks the blade up and gains her empowered basic attack. 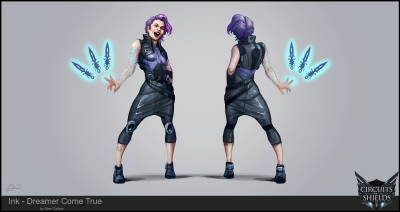